Derek and Liz’s photo booth was so much fun.  We had set up in the back corner near the buffet table and at the beginning, the guests had to walk through the area so we took pictures as they walked through to introduce them to the photo booth.  What a great idea.  Liz’s wedding colors were black, red, and grey so we incorporated these colors into the backdrop for the photo booth.  This was our fifth wedding at Stonebridge and Amanda, the event coordinator was great to work with, because with 200 guests, Amanda made sure there was room for the open photo booth.  The pictures were fantastic.  My favorite part of the photo booth is watching everyone have fun.

Digital Expressions Open Photo Booths has done quite a few events at the Orange Tree Golf Resort in Scottsdale, so their event coordinator invited us to showcase our photo booth at their bridal open house held on January 29, 2014.  There were not a lot of people who attended, but it was a great success.  I had even invited a few couples who were considering hiring us for their wedding.  They came by, took a picture, and hired us.  The white background with the silver overlay is becoming my favorite.

One thing I have added is the crowd control (stanchions).  I had purchased them from Arizona Commercial Surplus because I needed some way to keep people away from the camera, but keeping the area looking professional.  When I ordered the stanchions from Arizona Commercial Surplus, I had the option of ordering signs that would go on top of the poles.  Now, the stanchions not only showcase exactly what we are, because most people do not know what an open photo booth is, but guests are directed away from the camera.  When the pictures are being printed, people tend to crowd around the printer and they slowly migrate near the camera. 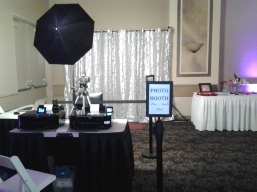