When Kelly, Ryan’s fiance, called Digital Expressions Photo Booths about Ryan Dempster’s retirement party, I wasn’t just excited for myself, but was more excited for my husband, Mike, and partner in our company.  Mike is a huge MLB baseball fan and when I told him we were hired for Ryan Dempster’s retirement party, Mike was pretty excited.  Ryan retired after 16 years of playing as a pitcher for the Florida Marlins, Cincinnati Reds, Chicago Cubs, Texas Rangers and Boston Red Sox, but he calls Chicago his home.  Ryan’s surprise retirement party was held at Las Sendas Golf Club and he was quite surprised.  His fiance, Kelly, planned the entire party.  Prior to the photo booth starting, Mike enjoyed listening to the speeches everyone gave because he practically knew who everyone was and in particular, Gary Allenson, who played baseball at ASU with Mike in 1976. 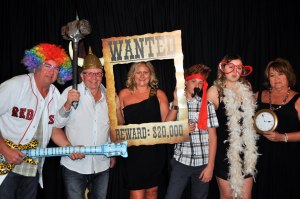