Lesia found Digital Expressions Open Photo Booths at the Phoenix Bridal Show in January 2013 and booked us for her reception shortly thereafter.  Lesia and Brian were married at the Crowne Plaza Hotel, Phoenix, and had their reception in the grand ballroom.  This was our second reception at the Crowne Plaza Hotel, Phoenix, and allowing us to set up next to the bar was a perfect idea.  Lesia’s wedding colors were different shades of purple and because one of her accent colors was black, she wanted a grey background because she was afraid that the black in the groom’s tux would blend in.  With Lesia’s permission, I accented the grey with a sheer black fabric that I found that had bling on it.  I really like the effect of the background.  I also made a short video of some of our favorite pictures taken.  Visit our Facebook page for more pictures. 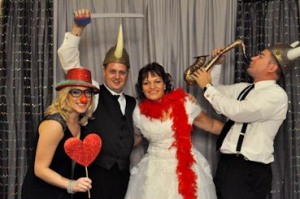