Parkview Elementary School had their 2013 Spring Festival and asked us to be part of the festival.  They had bean bag toss, the cookie monster, a fire truck, and helicopter.  We really had fun with the kids at the festival.  Tickets were sold and for two tickets, one picture could be taken at our photo station.  Kids love our props and we had the longest line of any booth. 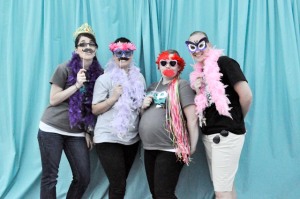 It was a little windy and it was challenging to keep the backdrop frame from falling over (again).  It fell over when we first put it up, but that was before we pulled the sandbags out.  The wind died down a little after the sun went down.

I am not a big fan of selling tickets to have a picture taken at our photo station, but this was for a good cause and it was a fundraiser.  I just don’t like people to think that people have to pay for a pictures when they are taken.