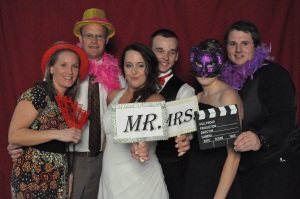 The Bride and Groom with friends

John and Ashlee’s wedding reception was held at Highland High School’s cafeteria in Gilbert, Arizona.  She had a casino theme and placed our photo station next to the four casino tables.  That way, the guests could take pictures and gamble in one area. Ashlee chose a red backdrop for her photo station because her colors were red, black, and white.  We had so much fun and we were really happy Ashlee chose Digital Expressions Photo Stations to celebrate her wedding. One other fun thing I do is create a video through weddingwire.com of some of my favorite pictures that are taken.  I don’t advertise it so I think it’s a nice surprise when a client gets the video by email.